As in many of Europe's best-known and most interesting wine-growing regions, viticulture also has a long tradition in Mittelburgenland. It began with the Celts more than 2000 years ago and experienced a first peak in Roman times, a second in the 14th century after the migration of peoples. Today's Central Burgenland had to endure difficult times during the Turkish Wars in the 16th and 17th centuries, and from the point of view of viticulture, the last third of the 19th century was the greatest turning point with the introduction of phylloxera. With the beginning of the 20th century, the Blaufränkisch variety finally asserted itself and became the main variety of the Mittelburgenland.

Nowhere else in the world is this noble variety cultivated as intensively and successfully as here in "Blaufränkischland". With 1170 hectares, it accounts for 55.6% of the 2000 hectares of cultivated land in the Mittelburgenland wine-growing region, and the trend is rising. The slopes with predominantly heavy, loamy soils with good water retention and the opening of the valley to the Pannonian lowlands offer the best conditions for the late-ripening, predominantly small-grape variety to thrive. In addition, there are a number of old Blaufränkisch vineyards in the area - some of them up to 80 years old - which produce only a small yield, but the sought-after top quality.

With such specialisation and the dominance of Blaufränkisch, it was clear that this should be expressed in the name of the region. This was done by clearly positioning it within the Austrian winegrowing landscape with the synonym "Blaufränkischland".

The next, logical step was made possible by the amendment of the Austrian Wine Law in 2000. According to this, since July 2002 the law has allowed quality wines with a typical regional origin and a clear (unambiguous) taste profile to be marketed under the designation of the region of origin and the addition "DAC". DAC stands for "Districtus Austriae Controllatus", which stands for "Austrian controlled designation of origin". 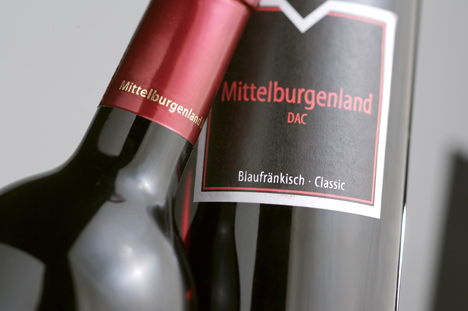 Austria thus also adopted a proven marketing system of large wine countries such as France (AOC), Italy (DOC), and Spain (DO), with the name of the region acting as a trademark. "The increasing industrialisation of the international wine industry demands a clear positioning from Austria. In Austria, terroir, handicraft and origin are in the foreground when it comes to wine," is the credo of the Austrian Wine Marketing Society (ÖWM).

Mittelburgenland is the first red wine region in Austria to follow this strategy and present typical Blaufränkisch wines under the name "Mittelburgenland DAC" from the 2005 vintage.

The regional wine committee responsible for this has not always had an easy time of it, as the diverse interests of the winegrowers and also many smaller and larger institutions have to be taken into account. With diplomatic skill and great commitment, chairman Anton Iby and, in the background, the managing director of Weinwerbung Burgenland, Willi Balanjuk, managed to realise the project. There was also close cooperation with the BA für Weinbau in Eisenstadt, which led to an interesting result. Quoting Dr. Walter Flak, head of the BA für Weinbau: "By analysing and statistically evaluating wine constituents, especially aroma components and minerals, it was possible to clearly assign the wine origin (wine-growing region Mittelburgenland). The very high resveratrol content from an international point of view was striking.

This also scientifically proves the independence and distinctiveness of Blaufränkisch from Blaufränkischland. 42 wineries, including all of the region's leading wineries, adhere to the strict cultivation and vinification regulations with their Blaufränkisch and voluntarily submit to the controls.

Probably the most important question that arises in connection with the Mittelburgenland DAC is that of the typical taste of the wines. This has come out clearly in our tastings so far: Delicately spicy nose with aromas of blackberries, blueberries, cherries, in the mouth with pithy fruit, plus hints of herbs (mint), juicy, implied acidity, dry with present tannins. Its clear, fruity character and a certain liveliness distinguish the variety in every ageing variant and stage of maturity, minerality and overall appearance are indeed unmistakably attributable to the Mittelburgenland.

The focus tasting of the Mittelburgenland DAC

The current tasting at Wein-Plus (Wine Guide) of the "Classic" and "Riede" levels underpins the conclusiveness of the concept and shows that the wines are of a consistently high standard.

Rarely do we experience a tasting at Wein-plus with wines from more than 30 wineries in one region, which hardly showed any outliers downwards, but quite a few upwards. This also shows that the previous "locomotives" of the region, such as Gesellmann, Igler, Gager, Heinrich, Weninger, Wellanschitz and some others, have successfully motivated the regional winegrowers' colleagues so that such a pleasing result could be achieved. 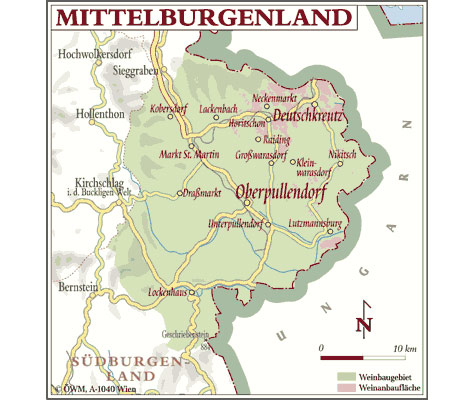 It will be interesting to see how the "reserve wines", which will be on the market from March 2007, will present themselves. Based on the experience so far, we can expect many positive results. And with the 2006 vintage, which is great in this region, success should come even more quickly than can be expected anyway.

The legal requirements for the "Mittelburgenland DAC"

(Excerpts). The grapes for the wine are harvested exclusively in the wine-growing region of Mittelburgenland, and the wine must be made from the Blaufränkisch variety. Smaller quantities of other varieties (up to 15 %) are tolerated in blending. The designation "DAC" must be indicated on the label in direct connection with "Mittelburgenland".

The indication of the wine-growing region, the specific growing region "Burgenland" and of large vineyards is not permitted. The name of the municipality and/or the vineyard may appear on the label. Other sales descriptions such as "Qualitätswein", "Kabinett" or "Spätlese" are not permitted.

Further characteristics are the obligatory indication of the vintage as well as a minimum alcohol content of 12.5% or 13% on the label and the bottling of the wine in glass bottles (litre and double litre bottles are definitely excluded).

The malic acid content must be less than or equal to 0.5 g/litre and the residual sugar must not exceed 2.5 g/litre. The wine must basically have the following characteristics: a taste typical of the variety, a muted strong red colour and a typical bouquet of the variety on the nose.

"Mittelburgenland DAC" wines are exclusively sold with a specific capsule, the appearance of which has been determined by the Burgenland Regional Wine Committee. The logical consequence is that in future the term "Mittelburgenland" on the label will be reserved for DAC wines. All other quality wines of the region are not allowed to use this term, here the designation of the specific growing region "Burgenland" is permitted.

Classic: To be allowed to use the designation "Classic", a varietal-typical, fruity and spicy taste is required. The wine is aged in traditional large oak barrels and/or in steel tanks. The wine must not have any or only a barely noticeable woody note. The wine may not be sold to consumers before 1 March of the year following the harvest.

The application to obtain the state inspection number for wine with the sales designation "Mittelburgenland DAC" may be submitted as of 1 January of the year following the harvest.

Riedeor Marke: In order to be allowed to use a Rieden or Marke designation, a varietal-typical, fruity and spicy taste is required, and the wine must be strong. The wine must be matured in traditional large oak barrels and/or in used barriques. The wine must have no or only a slight woody note. The actual alcohol content must be indicated on the label as 13 to 13.5 %. The wine may not be sold to the consumer before 1 September of the year following the harvest.

The application to obtain the state inspection number for wine with the sales designation "Mittelburgenland DAC" may be submitted from 1 June of the year following the harvest.

Reserve: In order to be allowed to use the designation Reserve (this can occur in connection with a vineyard or brand designation), a varietal-typical, fruity and spicy taste is required, the wine must be strong. The wine must be matured in traditional large oak barrels and/or in barriques. The existing alcohol content must be indicated on the label with at least 13 %. The wine may not be sold to consumers before 1 March of the year following the harvest.

The application to obtain the state inspection number for wine with the sales designation "Mittelburgenland DAC" may be submitted as of 1 January of the year following the harvest.

These are the legal regulations presented in excerpts. But as is so often the case with good wine, all this can explain the wine, but not really describe it.

If you want to take a look around the charming wine-growing region and visit the open-minded and warm-hearted winegrowers, you are warmly recommended to visit the regional wine shop in Deutschkreutz. There you have the opportunity to get in the mood for the region and the wine with over 120 wines.

The link to the region:
www.blaufraenkischland.at

Food companion with spice and acidity

Blaufränkisch as an international hopeful

The grape variety unfolds great potential outside the mainstream

A visit to the Blaufränkisch

These sights are worth a visit

Terroir and landscapes in Burgenland

At the centre of the Blaufränkisch universe

Carnuntum between drought and heat

Blaufränkisch as a speciality of the primeval sea terroir

All about the "Pinot Noir of the East