Interview with Silvano Brescianini, organic winemaker and president of the Franciacorta Consortium 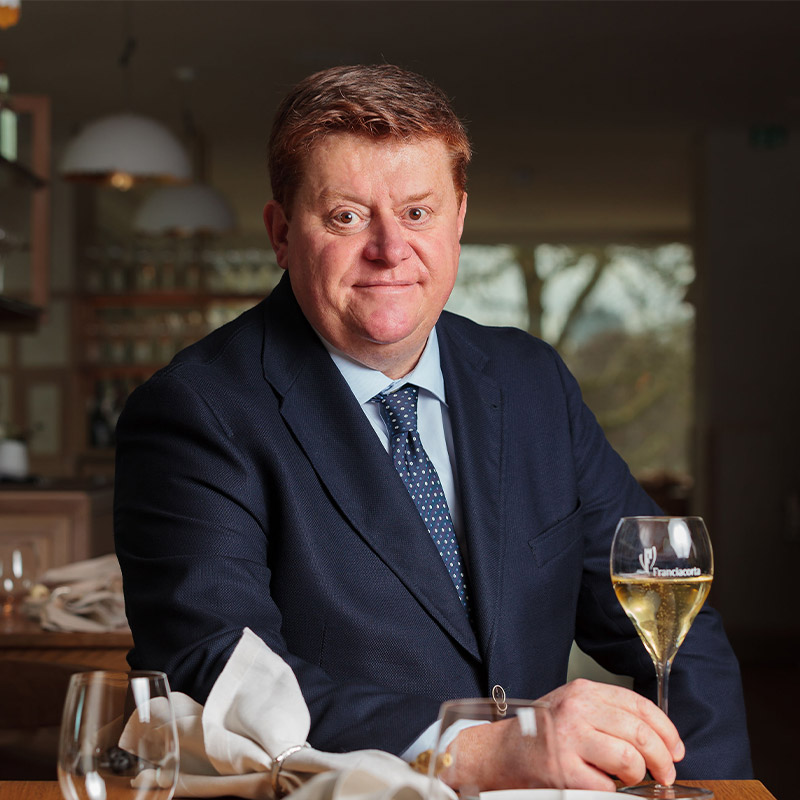 Franciacorta is Italy's leading sparkling wine appellation. Not only is the quality of the wines consistently high. The producers also set standards in other respects. Two-thirds of the cultivated area is certified organic, which is an international record Raffaella Usai spoke to Silvano Brescianini. He has been president of the Franciacorta Consortium since 2018 and was the first winegrower in the region to convert to organic production.

Today, Franciacorta is one of the international pioneers in organic viticulture. When did the rethinking start?

Silvano Brescianini: We started it at our winery in 1998. But after the turn of the millennium, other wineries in Franciacorta also started to deal with the issue. You have to remember that organic cultivation is not a technical problem, but a question of mentality. For a winegrower who has used herbicides and systemic pesticides on his vineyards for decades, a conversion to organic farming is scary and risky at first.

As an organic pioneer in Franciacorta, did you feel a lot of headwind at first?

Silvano Brescianini: In the first few years there were many who smiled at me, but that didn't impress me. I was convinced I was doing the right thing. Many who initially rejected organic farming were persuaded over time because they saw that it really works. Sharing experiences is eminently important for the common growth of an appellation. I have always been happy to share my experiences and still do today.

What has changed since then?

Silvano Brescianini: In the past twenty years, the awareness of the winegrowers in Franciacorta has changed. There is now a great sensitivity to sustainability and to the issue of biodiversity, which will become increasingly important in the future. In the beginning, everyone was concerned with doing without pesticides and still making good wine. We succeeded in doing that. In a second step, we now want to work together to improve the vitality of the soil and the biodiversity of the region.

How does that make itself felt?

Silvano Brescianini: In the meantime, there is even a certain competition among the wineries, in a positive sense, to outdo each other in terms of biodiversity in the vineyard. Everyone has understood that the quality of a wine is closely related to the health of the ecosystem. The greater the biodiversity, the more beneficial insects, the better off the vineyard will be.

What are the goals of the consortium?

Silvano Brescianini: The consortium is committed to providing all winegrowers with the knowledge to measure and increase the biodiversity of their vineyards and soils. At the same time, we aim to implement plant protection in the most targeted and gentle way possible. Our sustainability concept includes both the reduction of pesticides and herbicides in conventional cultivation and the reduction of greenhouse gases. We also monitor the use of agricultural equipment and machinery as well as the wineries' energy and water consumption. In addition, regular measurements of the wineries' CO₂ balances take place. We are not only concerned with organic certification, that would be too short-sighted. All winegrowers, even those who are not certified organic, pursue an environmentally friendly strategy and share the consortium's aspirations. The fact that we are all pulling in the same direction makes me very proud.

What do you say about the problem of the use of copper as a heavy metal in organic farming?

Silvano Brescianini: At the moment, copper is still the only agent in organic cultivation that effectively protects against peronospora, i.e. downy mildew. The use of copper and the resulting accumulation in the soil is an important topic, and a lot of research is being done on it. But winegrowers now also know how to reduce copper by applying it differently. Nevertheless, a natural alternative would be desirable. I am sure that there will be one in the coming years.

Is it difficult to work organically in Franciacorta? There are certainly growing areas in Italy where the climate makes it much easier

Silvano Brescianini: Clearly, the regions in central and southern Italy have climatic advantages. Franciacorta lies at the foot of the Prealps, so we have many thunderstorms and regular rainfall. But if there are 2,000 hectares of organically farmed land here, that's proof that it can't be that problematic. The knowledge and know-how of the winegrowers is growing from year to year. What may have been difficult at the beginning is now routine.

Silvano Brescianini: Climate change makes everything much more difficult, and that applies to both organic and conventional cultivation. The weather extremes are increasing, the vintages are very different, you can no longer work with standard recipes. 2015 and 2017, for example, were very hot and dry, while 2014 and 2016 were rather cool and very rainy. Today, you have to reckon with everything.

Two-thirds of the cultivated area is certified organic, but the consumer only finds the organic logo on a few Franciacorta bottles. Why is that?

Silvano Brescianini: Some wineries only cultivate part of their vineyards organically, while other areas are still cultivated conventionally or are in the process of being converted. Since the organic grapes are usually not processed separately, the wines cannot be certified organic. On the other hand, Franciacorta DOCG comes onto the market two years after the harvest at the earliest. So the wines are always at least two years, often much longer, behind the reality in the vineyard. However, the number of bottles with organic logos is steadily increasing. In the not too distant future, the percentage of organically certified bottles will roughly correspond to that of the organically certified area.

In Franciacorta, there is the old, autochthonous grape variety Erbamat, which has been allowed to enter the wines with a share of ten percent since 2017. You have been very committed to changing the production rules. What makes Erbamat so special?

Silvano Brescianini: The variety has been native to the area around Brescia for 500 years, which makes it very valuable from a historical perspective. But what is much more important is that it is characterised by its special character, which is particularly suitable for sparkling wine production. It has a high acidity and a low pH, it is not aromatic and it ripens late. All this makes it very interesting.

So the Erbamat has advantages in terms of climate change?

Silvano Brescianini: In the past, farmers did not grow the Erbamat because it never really ripened. Climate change has changed that. It is now harvested in October, much later than the rest of our varieties and can be very helpful in the long run.

How large is the area under Erbamat now?

Silvano Brescianini: It is still relatively manageable. In the past ten years, many trials have been conducted with the variety. But what we don't know yet is how it will develop over time in the bottle. There is still a lack of experience. In Erbusco, a trial vineyard has also been planted together with the University of Milan and work is being done on clone selection. Around ten wineries have already planted Erbamat, but there is currently a lack of planting material. In the next two to three years there will be seedlings on a larger scale and then the area will also increase.