On a visit to friends, I had the honor of determining the wines of the evening. Selection: Some of the most interesting wines in the area (Canton Thurgau). Thurgau - located in the very northeast of Switzerland - is a small wine region even by Swiss standards and the wines are relatively little known. Here, agriculture is dominated by fruit growing; it's not for nothing that the canton is somewhat disparagingly, but also affectionately, called "Mostindien". But there are also almost 300 hectares of vineyards, mainly on the south-facing, gently sloping slopes, on the Islisberg, near Weinfelden, in the Thurtal, on the Untersee, in the Lauchtal... Probably the best-known winemaker in the area was Hans Ulrich Kesselring (sadly deceased in 2008), his winery is continued by a relative and is still considered a showpiece operation in eastern Switzerland. The average Swiss wine lover hardly knows much more. I was all the more curious about two vintners I knew only by name, Wolfer and Burkhart. 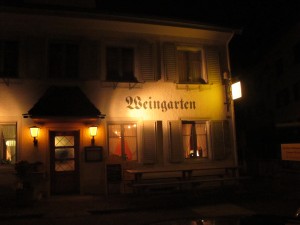