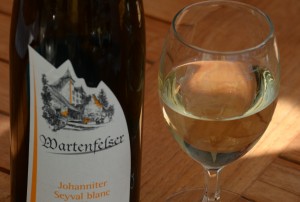 For once, not a wine that you have to know, or even can know. It only has regional or local significance. Nevertheless, it is interesting because it documents a development that is becoming apparent not only in Switzerland, but also in many traditional wine countries. Internationalisation - also in the wine scene - has caused a counter-movement; a return to tradition and proximity. So to speak, wines made "on the doorstep", where you can see and experience the growth and development of the vines and grapes at all stages. Solothurn, where this wine comes from, has long since ceased to be a wine canton. Where vines once grew on the gentle slopes, "Schönwohnen" has long since eaten its way up. From 1900 onwards, the vine population was reduced to such an extent that the few remaining acres no longer even appeared in the wine statistics. But there are still historic sites where vines are now being cultivated again. For example, on the southern slope of Wartenfels Castle, above Olten. The castle and palace vines, as many examples testify (not only in Switzerland), are not only historical reminiscences, they can awaken an understanding for wine and wine culture; they can make it possible to experience how wine came to our region and rose to social honour. 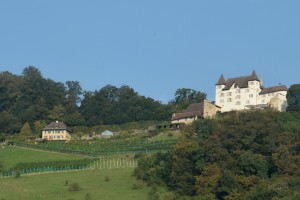 Most castles and palaces have long been museum pieces. They document the residential, living and social culture of bygone - long outdated - times. Actually, only wine has not become a museum piece; it is a living witness to the beautiful (and also the good) that has been able to survive or (as here) is being brought back. It is probably a good one hectare, no more, where the vines grow again below the castle hill. This is not the size of a vineyard that a winegrower can live on. It is mostly hobby winegrowers or winegrowers' associations who lovingly (and often skilfully) cultivate this kind of vine and wine culture. Drinking a castle wine in the baroque garden or on the castle terrace is almost a ritual for many tourists. But also the population in the communities at the foot of the castle look for their "own" wine, a small piece of identity in an agglomeration that has become devoid of identity. We find the same phenomenon today almost everywhere where wine is (or was) historically rooted. I can list a few dozen examples, also in Germany, France, Italy... In this case, the two Schlossweine are modern wines, from PIWIS vines (fungus-resistant), which are actually little known. Cleanly made, beautiful in their aromas, fresh and full of character, completely in keeping with the castle. The white is made from Johanniter and Seyval, the red from "Cabernet Jura", an interesting new Swiss variety. The white is significantly more flattering, fresher, more "cheerful", really suited to the location where it grows, far above the plain. The red takes some getting used to, aromatic, (still) quite tannic, the taste is reminiscent of a Syrah or Cabernet Sauvignon from hot regions and has a somewhat peppery note. Not necessarily a pleasure wine, but rather an experience wine.