At that time, there were only two Grand Cru A in Saint-Emilion (now there are four: Ausone, Cheval Blanc, Angélus and Pavie); at that time, these wines were - from today's perspective - still "affordable"; today, the proportionality has been lost. Pure presige and speculation objects. What a pity! My wife's favourite wine (back then) was Ausone. Why Ausone in particular, I don't know. It is certainly an excellent wine, but there are many other excellent wines in Borderlais. So I bought one or two bottles for my wife (and me) from time to time, much to our delight. But then came the 1997 vintage, a weak vintage - also in Saint Emilion - but not at Château Ausone. Since 1995 (when he became the sole owner), Alain Vauthier has reallocated the various vineyards, used only the best plots for his first wine, made a lot of effort in the vineyard and carried out a strong selection. In any case, the '97 was one of the few really good wines in St-Emilion. I was already enthusiastic about this at the barrel tasting and subscribed for four bottles. Since then, we have referred to these bottles as our "fall from grace", because at that time they cost double, almost triple, the price of the previous years in one fell swoop. A "small detail" that I overlooked. The "fall of man" remained in the cellar, we waited patiently for the day when the sin would be forgiven, on a very special day, a round birthday, at a social event or I know when and where... The right day did not come. At least, we did not perceive it. Then, when the wine did not increase at auctions (and in reviews) but showed constant shrinkage, I opened a bottle - on an almost ordinary day - and realised that there was still some of this wow wine left, but not much of the "wow". Granted, it was still a good wine, probably still one of the best of the vintage. But in the meantime there was the 2000, the 2005, the 2009... However, for far more than 1'000 francs (the bottle)! Our "fall from grace" is a stroke of luck. 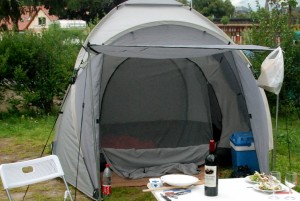 So it came about that we opened the second last Ausone of the 1997 vintage on (my) half-round birthday. The day was fixed, but the circumstances were more of a coincidence. We were at a campsite, living the simple life, so to speak: Tent, gas cooker, folding table, etc. That's when the "fall from grace" came into the glass. A wine that cost more than 300 francs at the time, on the camping table in front of the tent, where an overnight stay doesn't cost a tenth of that. Whoever says they are true snobs is probably right. But this story teaches me: 1. wines can be enjoyed anywhere. 2. wines should not be saved until the ultimate right moment. 3. high wine prices do not guarantee maximum enjoyment. 4. no, let's not go there... Our "Fall of Man" was a beautiful wine, already very, very ripe. Much of its complexity has already been lost, it has slimmed down, everything has become a little weaker, the bouquet, the colour, the aromas, its power, the harmony... It has used up its potential and is beginning to say goodbye. The once grandiose Ausone (of the weak 1997 vintage) has become a good wine whose substance is not (any longer) sufficient to repeat the former wows.

for the month of November 2018