The second wine of Château Monbousquet bears the name of the daughter of Gérard Perse, the "child prodigy" from Paris, who came to Saint Emilion 25 years ago as a career changer and is still making trouble there. The ambitious businessman - once the owner of a supermarket chain - wanted to become a winemaker and probably had the necessary small change. In the meantime, he owns five renowned wine estates (perhaps already one more, who knows for sure?): Château Monbousquet - it was his first purchase -, five years later Château Pavie, whose wines are now more than ten times more expensive (subscription price from 200 francs), Château Pavie-Decesse, Château La Clussière, which no longer exists because it has been integrated into Château Pavie, Clos les Lunelles (Castillon). Monbousquet cannot be compared to Pavie (neither in price nor in quality), but Monbousquet cannot deny the wine-intent of Gérard Perse: extremely dense, rich, fruity, spicy. Is the second wine (mostly from younger vines) also like this? 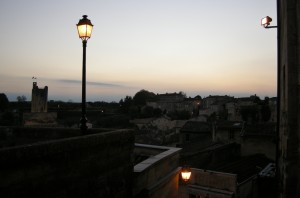 for the month of November 2018