For a long time, the three Léoville estates, all deuxième crus, had a hierarchy that was almost set in stone. At the top was Léoville Las Cases, which for years and decades has been considered close to the premier crus. Then Barton gradually moved up to second place and Poyfferré remained the "taillight" for a long time, if one may put it that way. In the 80s and early 90s this was still largely true, but then Poyferré made an incredible spurt and since 2000 has at least reached the level of Barton, if not often more. Even the comparison with Las Cases is flattering from Robert Parker's point of view in the best years: 2009: Las Cases = 98+ points, Poyfferé = 100 points!!.. 2010: Las Cases 96+, Poyfferé = 98+. So Léoville Poyfferé has taken off, at least from Parker's point of view. René Gabriel sees it similarly - even if there are differences in the ranking to Parker. One thing is certain: the three wineries fight - year after year again - for the first place, so to speak. Parker, Gabriel and other points, that is one thing. But the other is the drinking pleasure. All three wines need - to really reach their zenith - long bottle ageing and also a lot of patience on the part of the consumers. Perhaps the most patience is needed for Las Cases, which often even fails when young - for sheer power, pressure and density. 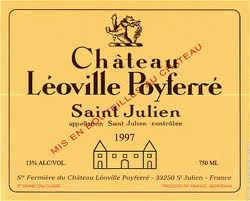