Wines, that bear a protected designation of origin, meet strict quality specifications and encourage responsible alcohol consumption. This is a key message of three German-Greek business dinners held in Maintal, Hesse, at the beginning of August.

On three evenings, the wine marketing and event agency Wein-Plus Solutions organised the events together with the Greek agricultural consultancy Novacert. The client was the Vaeni Naoussa winery from Central Macedonia in Northern Greece, which also provided five wines for the events.

The wines accompanied a three-course menu in the restaurant "Fleur de Sel" in Maintal-Dörnigheim near Frankfurt. In addition to a group of Greek journalists, five German wine experts from the trade, gastronomy, consulting, further education and the media were invited on each evening in alternating line-ups.

The project was part of the information programme for responsible wine consumption co-financed by the European Union and its member states - in this case Greece. The campaign is in its second year of implementation and is expected to run until 2023. With this in mind, there were special rules to consider during the culinary tasting. 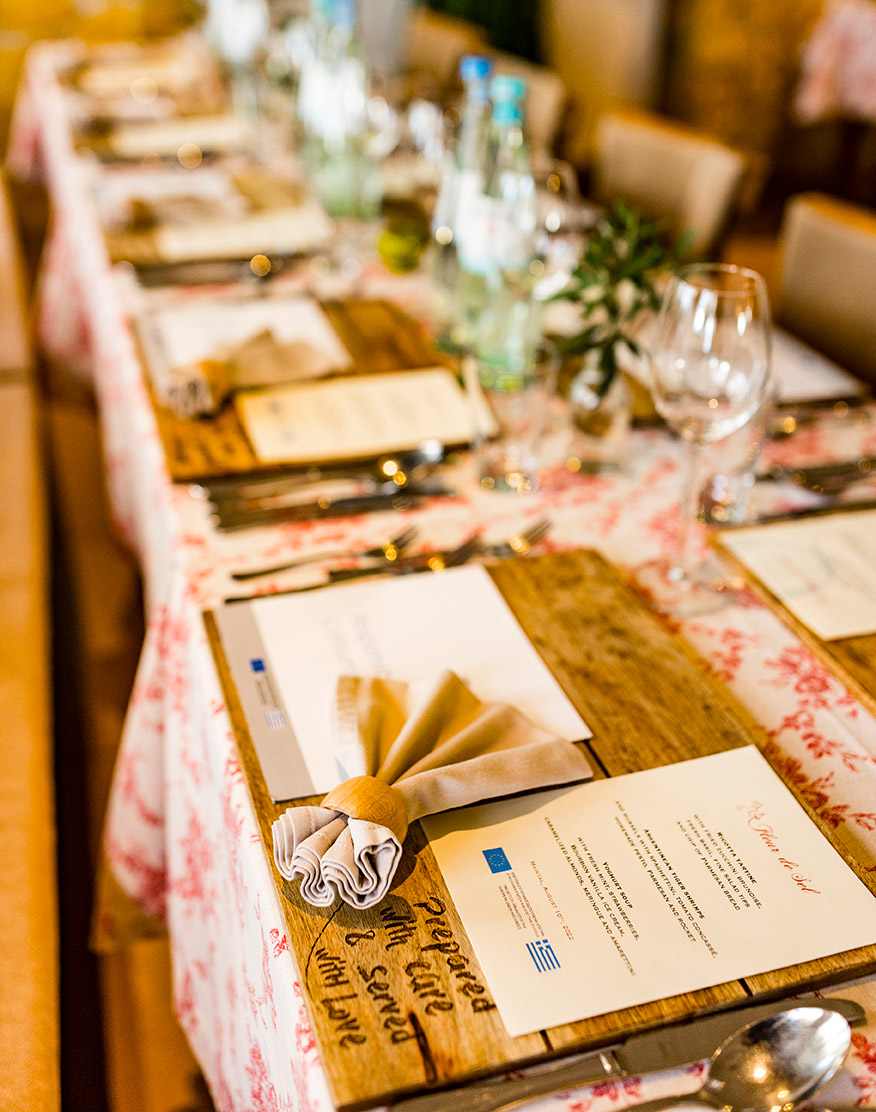 During the business dinners, information was provided on two topics: firstly, the EU guidelines for moderate wine consumption, and secondly, the system of protected designations of origin in the EU. This was done on the one hand in the form of a brochure summarising the essential contents, and on the other hand in a short lecture and during the table discussions.

To this end, the information brochure contrasted wines with protected designations of origin - called "branded wines" - with "cask wines of unknown origin" and argued: "Unlike branded wines, cask wines do not have a label and therefore the consumer cannot find out very important details such as the producer, origin of the raw materials, varietal composition of the wine, year of harvest, year of bottling and other data that contribute to responsible consumption." 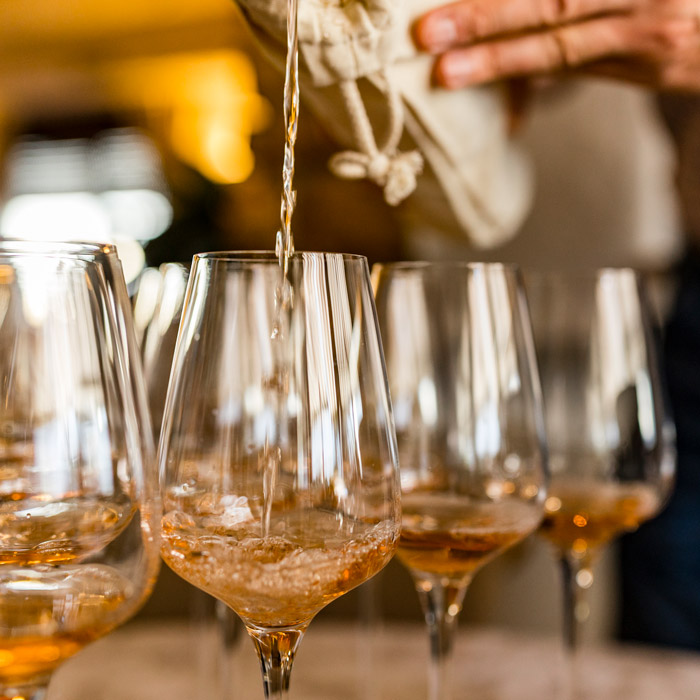 According to this so-called principle of origin, there are three quality levels for wine from the member states of the Union - in ascending order:

The g. U. is in principle and in any case the narrower designation of origin, which stands for a higher wine quality. It defines the strictest specifications with regard to the geographical unit for the cultivation and processing of the grapes, the grape variety(ies), the cultivation, the yield - the lower the yield, the higher the extract of the grapes and thus the quality of the wine -, the harvest, the vinification, the ageing, the maturing time in the cellar and/or certain analysis values.

In addition, the wines had to be tasted blind during the business dinners. The only information the guests were given was the grape variety(ies), the vintage and the designation of origin, but not the exact identity of the growths.

Finally, the motto "responsible wine consumption" was taken so seriously that only one bottle of each wine per evening was available for the entire table party. In fact, however, there was still some left over from almost all the bottles each evening - which was by no means because the wines did not appeal to the guests in terms of quality; on the contrary.

In this way, moderate wine consumption was vividly put into practice: drinking wine "in moderation", "slowly" and "together with water", as the EU information brochure recommended. 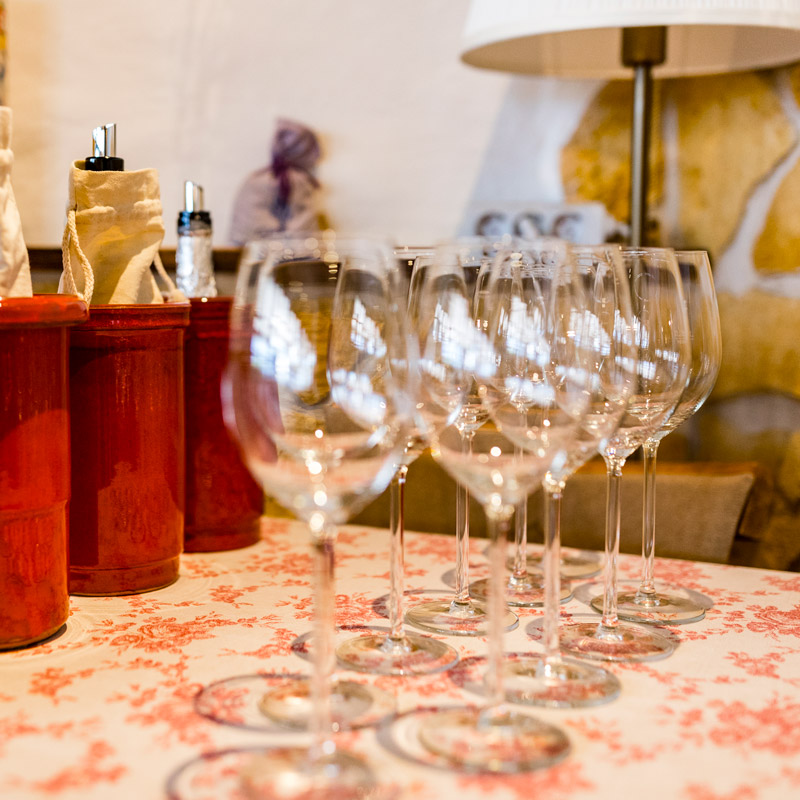 "Greek wine has developed excellently in the last 15 to 20 years. This event also showed that," judged participant Simon Schmitt from Frankfurt, who as a freelance journalist publishes the Frankfurt Food Diary, among other things. "It is always very enriching to get to know an exciting wine region and its parade grape variety in this depth and to exchange ideas with experts about it." Project manager Carsten M. Stammen from Wein-Plus Solutions, who was both responsible for the organisation and acted as host for the three evenings, is pleased with the positive response. He explains the choice of restaurant: "The 'Fleur de Sel' offers upscale, French-inspired Mediterranean cuisine with an excellent price-performance ratio. We deliberately did not choose a Greek restaurant, but one with Mediterranean cuisine. And the business dinners showed that Greek wines with protected designation of origin are not only wines full of character, but also convince as high-quality food accompaniments."

The rosé wine "Dogmatikos" Makedonien PGE 2021, a single-varietal Xinomavro with 11 g/l residual sugar, presented itself as an uncomplicated aperitif with its red-fruity aroma.

The white wine "En Lefko" Macedonia PGE 2021 was a cuvée of Malagouzia and again Xinomavro (here white). It showed notes of yellow fruits with exotic hints and a fine minerality, as well as freshness, smoothness and balance. With its combination of sophistication and drinking flow, it proved to be very versatile from a culinary point of view and accompanied the hors d'oeuvres superbly on all three evenings: a tartare of saddle of pasture lamb with tomatoes, olives and couscous as well as a ricotta tartine with fried courgette brunoise and deep-fried anchovies with saffron crème fraîche and salad. 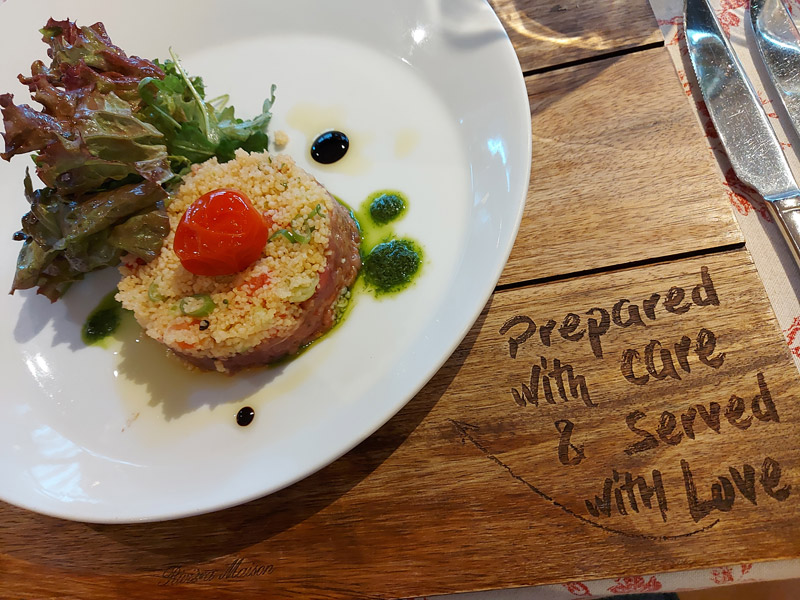 All three reds were tasted in parallel with the main course, and there were clear favourites among the guests, albeit different ones. However, everyone agreed that none of the wines would not have suited at all. Xinomavro, aged for 12 to 18 months in wooden barrels, proved its worth with braised veal cheeks with parsley-potato mousseline, colourful vegetables and Madeira jus, as well as with suckling pig's back on potato puree with truffled pointed cabbage and caraway jus - and even with seafood: Redtail prawns and mussels with sepia spaghettini, strong spicy tomato concassée, parmesan and rocket. 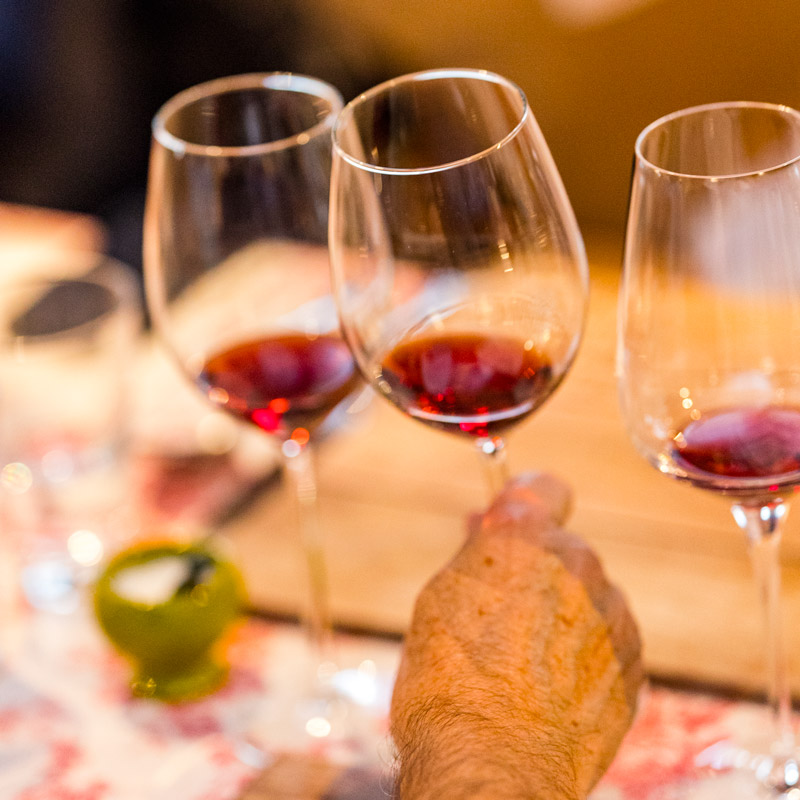 Christine Schloter from the Weinkönner Tasting-Store in Leipzig describes her impressions as follows: "An exciting evening with exceptional wines of autochthonous grape varieties of Greece. It turned out that the independent wines are also harmonious food companions outside of typical Greek cuisine. I was particularly impressed by the white cuvée of Malagouzia and Xinomavro with the lamb tartare and a mature Xinomavro with a fine chocolate note, which went well with the strong main course, but only really showed its full charm with the raspberry crème brûlée."

Cyriacus Schultze from the wine and business consultancy Food & Wine Culture in Schönau expressed a similar opinion: "It was an exciting journey through the fascinating diversity of indigenous grape varieties that give Greek wine its very own character. Greece has always been justifiably proud of its own grape varieties, and the trust in indigenous grapes is now being rewarded: not only Udo Jürgens raved about it, but many gourmets are starting to get acquainted with the elegant, spicy Malagouzia or the powerful, storable Xinomavro."

Kirsten Burkhart from the wine shop Wein365 in Bad Homburg advocates curiosity and open-mindedness when enjoying wine: "The Greek wines were new territory for us and were an enrichment for that reason alone. We were also surprised by the expressiveness of the red wines, which we had not expected. It's always good to think outside the box and look at our neighbours! The food in the 'Fleur de Sel' was of course also excellent and gave the wines a suitable background." 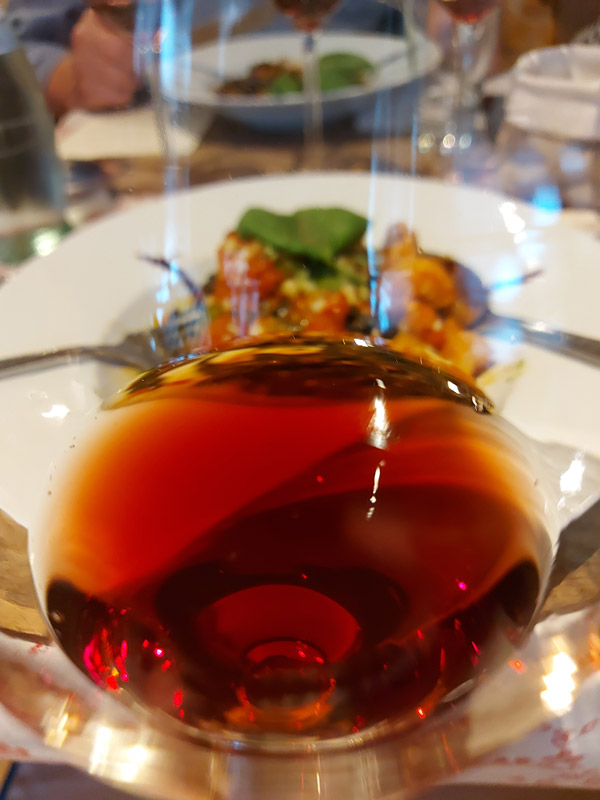 Wein-Plus Solutions was responsible for selecting the restaurant, coordinating the menu, assigning the wines and managing the participants at the three German-Greek business dinners. For the targeted invitation of the German guests, the agency used the wein.plus database with over 230,000 members. Since eight nationalities are represented in the team of the "Fleur de Sel" restaurant, the Greek guests could even be looked after in their national language and menu cards were available in German, English and Greek.

Project manager Carsten M. Stammen not only has many years of experience in gastronomy and event management, but also in communication and marketing. Moreover, he himself is a wine expert and lecturer, so that the additional engagement of a sommelier was not necessary for the professional accompaniment of the evening. Thus, Wein-Plus Solutions offers full-service event management for the wine industry from a single source - also for your event!