The estate is legendary in the Swiss wine scene. For many years, Hans Ulrich Kesselring nurtured, cared for and managed the estate with forest, meadows and vines above Weinfelden - in the family since 1784 - with a great sense of tradition, but also in an effort to embrace modernity when it seemed better to him. Then he passed away unexpectedly, his nephew Johannes Meier had to take over the business overnight. A difficult legacy. But he made it - together with the oenologist Ines Rebentrost. His wines are once again among the best in Switzerland. And the inevitable "eternal" comparison with the wines of Kesselring has long since ceased. Johannes Meier is the new lord of the estate and he and his team make excellent wines, just as good as his uncle once did. This "Clairet" is actually a Bordeaux blend, a cuvée of Merlot, Cabernet Franc and Cabernet Sauvignon. The term Clairet is correct, but also confusing. In England, Bordeaux is - according to old tradition - often still called "Claret", while in the Bordelais, Clairet is understood to mean a light, rosé-like red wine from the region. To say it in advance, it is not the best wine of the winery, this is not due to the skill of the team, but rather to the fact that the Cabernet Sauvignon is difficult to produce. 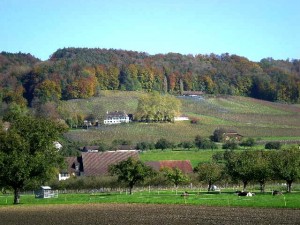 Cabernet Sauvignon is difficult to ripen in our latitudes and the Cabernet Franc is a rather difficult companion. I have harvested it for years (in small quantities) in the Bündner Herrschaft - Weingut Von Tscharner - and know about its caprices (at least in our area, in our climate and in our soil). We are farther north of Bordeaux and the Loire here and cannot count on the Gulf Stream. That's why I don't quite understand why the excellent team from Schlossgut also has to try their hand at the Bordeaux blend, when Pinot Noir is their real strength. Wonderfully Swiss Burgundian, that is - for me - the great label of the winery. Four Pinot Noirs (No. 1 - 4), from the simple (but excellently made wine) to the top wine (No. 4), which is only made in good years, in very small quantities (which is why it is rare). The Clairet does not come close to these filigree top wines. It is indeed very appealing, soft and round, but it lacks the fine differentiated aromas, the nuances that (can) make a good wine a great one. Maybe it's a bit unfair if I "nag" here, maybe it's just the accumulated prejudices (Bordeaux blend is tried almost everywhere nowadays) and the urge to go mainstream, which is hard for me to understand. In any case, I drank the wine for the first time and - I readily admit this - with fun, even with pleasure in drinking. Nevertheless: the wine is not great, but also not too Bordeauxised - much more a fun wine, still too young (it can therefore definitely still increase), but not enough independent and distinctive (price 34 CHF), to buy at the same price (ex farm) as the Pinot No. 3, which I prefer to all other wines of the winery - even the whites.