The anarchist of the Monferrato

The province of Alessandria in Piedmont covers a particularly large area and includes five distinct wine-growing areas: the Acquese, the Ovadese, the Gaviese, the Tortonese and the Casalese, derived from the names of the main towns of Acqui Terme, Ovada, Gavi, Tortona and Casale Monferrato. They represent the easternmost part of southern Piedmont (from the Langhe to Tortona, geologically it is defined as Bacino Terziario Piemontese, in the Oligocene a wide gulf filled with water). This province produces a considerable number, but above all a considerable variety of quality wines and is distinguished from other areas by a significant viticultural biodiversity. 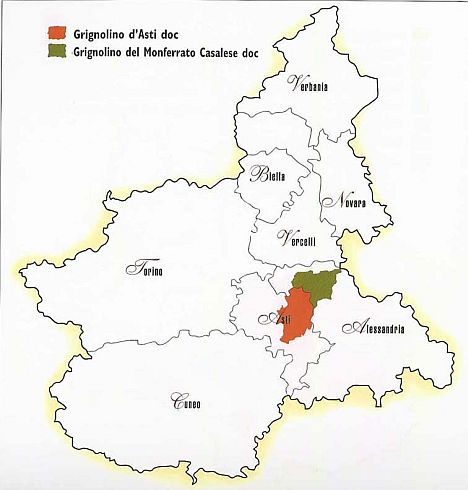 In this article we are talking about one red grape variety in particular: Grignolino, which the people of Monferrato Casalese (DOC Grignolino del Monferrato Casalese) have in their hearts. Only people as stubborn as the local people have been able to save this wine from the tendencies of international taste, which courts the public's favour with flattering sentences such as the following: "( ) The 1997 Merlot might be called liquified Viagra. An incredibly sexy nose of smoke, black fruits, cappuccino, and toasty wood is followed by an expansive, terrifically concentrated wine with a sumptuous texture, no hard edges, beautifully integrated acidity and tannin, and a long, 35 second finish. (...) this stunningly aromatic, multi-dimensional wine." So the Nutella wine or the "liquid Viagra" of the nineties, bombshell in color, full in the mouth and dear to Robert Parker, author of the quoted remark. Something like that could have killed the Grignolio, but it didn't. The resistance is stirring on the right bank of the Tanaro River, at the bottom of the Grignolino. The main actors are the farms that have written the recent history of this wine such as Bricco Mondalino dei Gaudio in Vignale, Vicara with Domenico Ravizza in Rosignano, Carnevale in Cerro Tanaro and several others.