8. April 2010, opening day of Vinitaly: For the first time, an Italian head of state visits the most important wine fair of the Bel Paese. The reception is not only warm because even before the trip to Verona, Giorgio Napolitano signed the new national wine law. It replaces decree no. 164 from 1992, and is celebrated as a milestone by the wine sector. Rightly so? An overview of the innovations by Markus Blaser. 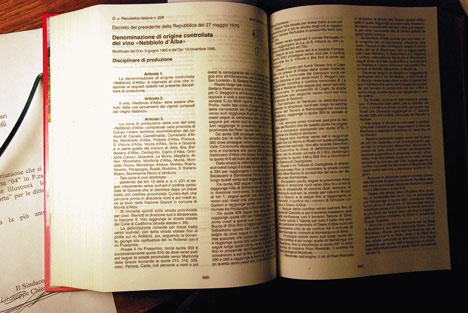 One thing first: The fact that Italy is getting a new wine law at all is not the merit of its politicians, but of the European Union. With the Common Market Organization for wine, which was introduced in 2008, the member states were obliged to adapt their national regulations to the new European rules. In this respect, the new wine law only repeats in many respects what has long been decided at EU level.

However, the Italians were not content with merely adapting to EU law, but used the opportunity to make a few substantial innovations. Surprisingly, the impetus for this came from the officials of the Ministry of Agriculture, which presented a first draft law for discussion in mid-September 2009. This sparked heated but productive debate and surprisingly little useless polemic among stakeholders during the cold winter months.

The result is - quite contrary to the prevailing trend towards liberalisation and watering down - an overall framework law with mostly clearer and stricter rules.

The first of ten sections contains the adaptation of the Italian appellation system to the new EU regulations: DOC and DOCG become DOP; IGT becomes IGP. The old and the new appellations may be used alternatively or together on the label. Moreover, the use of additional designations "classico", "storico", "riserva", "superiore", "novello", "passito", "vigna") is regulated in detail. Furthermore: The vintage must be indicated on the label of DOC and DOCG wines (with the exception of sparkling, semi-sparkling and sweet wines).

The production regulations have to become stricter with each ascending category. All appellation wines may only be made from recognized grape varieties; for IGT wines, varieties under observation are also allowed.

Moreover, in the future, it will be possible to vinify table grapes; the previous ban has been lifted. It is not as harmless as it sounds: In certain areas of southern Italy, astronomical yields per hectare, irrigation, and intensive fertilization yield liquids that were so far only suitable for subsidized distillation. As it is said to be about very large amounts produced illegally so far, it remains to be seen how pronounced the imbalance of the table wine market triggered by legalization will be.

Furthermore, the new wine law stipulates that an appellation will be cancelled if it is not used or only marginally used during three consecutive years (DOCG: less than 35 percent of the area; DOC: less than 20 percent; IGT: less than 10 percent). In these cases, Italy applies to the EU Commission for the cancellation of the appellation. In case of a PDO, an application for downgrading to IGP can also be filed - the downgrading of a DOCG to DOC, however, is not provided for.

In the third section, minimum requirements are set for the production regulations: delimitation of the production area, physico-chemical and sensory characteristics of the wines, minimum alcohol content, maximum yield per hectare, grape variety list, production methods, storage and bottling in the production area. Four major innovations can be noted here:

Position of the consortia

The fourth section regulates third-party controls. This includes the state recognition of the control bodies, the modalities of certification of the appellation wines or their declassification as well as the chemical-physical analysis and sensory testing. (The exact analysis and testing procedure is described in a separate law) Anyone producing a PDO or IGP wine is obliged to register with a control body - this ensures that all producers are controlled.

Section five concerns the national wine committee. This committee will lose its decision-making powers about new appellations and changes of the production regulations to the EU Commission. In the future, it will only have an advisory function towards the ministry of agriculture and will be reduced from 40 to 20 members. Besides the administration, regional and farmers' lobbies, the consumer associations, which are no longer represented, will lose influence, whereas the wine industry and wine wholesalers will keep their seats. The new committee will start its work on January 1, 2012, until then, the current one will remain in office.

If the wine committee loses political weight, the role of the consortia in section six will be strengthened. This is already shown by the fact that there is no longer talk about "voluntary" consortia, but article 17 states: "The consortium is formed among all subjects that are subject to the control system of the appellation." This provision, which seems rather strange in German translation, is to make clear that, according to the will of the legislator, as much as possible all producers of an appellation are to belong to the consortia - even though there cannot be a compulsory membership, because this would not be compatible with the freedom of trade and commerce. On the other hand, no grape producer, self-press maker or bottler who is subject to the control system of the appellation in question can be denied access to the consortium.

Some pressure on producers to join the consortium stems from the fact that, under certain conditions, consortia can exercise their functions vis-à-vis all producers and not just their members. In order for a consortium to have this position of power, it must have as members at least 40 percent of the winegrowers representing at least two thirds of the production. If this is the case, the consortium can take over the organisation and coordination of production and commercialisation, regulate supply to ensure quality, represent the rights of producers vis-à-vis third parties and monitor trade. It can also prescribe the use of a consortium trademark or logo.

It thus performs the tasks of protection, promotion, market development and consumer information on behalf of all producers and not just on behalf of the consortium members. Finally, this erga omnes power also gives the consortia the right to demand an initial contribution from each new producer when he is placed under the control obligation, even if he does not join the consortium.

Moreover, the costs of the consortium's activities are also borne not only by its members but by all the participants in an appellation. The criteria according to which they are to be distributed will be regulated in a separate decree of the ministry of agriculture by autumn 2010.However, a consortium can also be officially recognized if at least 35 percent of the vintners representing at least 51 percent of the production belong to it. In this case, it basically performs the same tasks, but only towards the consortium members. It then does not have erga omnes powers, such as the regulation of supply, the logo and the starting fee.

Strengthening of the collective brands

The legislator's intention seems clear: the consortia, although now without certification powers - are to be strengthened. This is only logical in view of the goal to better protect the appellations, because it encourages producers to cooperate. The consortia's advertising campaigns and market development measures benefit in particular small and medium-sized businesses, which would not be able to find the financial means for this. Equally positive is the fact that the consortium logo promotes the appellation as a whole and not the private brand of a single producer.

So it was only logical that the Unione Italiana Vini (UIV), which above all represents the interests of the large wineries and the trading houses, started to fight against the initial contribution of the Erga-omnes consortia, which would affect all producers: The wine industry launches branded wines and has the necessary budgets to market them worldwide. It is only interested in appellations if the private brand or the company name is less known than it. If the ratio is reversed, it is more lucrative for them to leave the consortium and do marketing on their own behalf. The withdrawal of Gancia, Martini&Rossi, Vallebelbo and others from the Asti consortium at the beginning of 2010 is an eloquent example for this process (see Merum 2/2010).

So, it is only to be welcomed that the new wine law puts a stop to such movements. In the end, the umbrella organization of the consortia (Federdoc) and the insight that appellations can only be seriously protected if the entirety of producers is held responsible. In the same direction, section seven concerning the labeling and presentation of wines, the innovation that the banderole, which so far only DOCG wines had, is now mandatory for DOC wines, too. DOCG wines can now be sold in containers of up to six liters (previously five). Finally, it is now allowed to indicate the respective appellation on the label of processed products (grappa, vinegar, etc.), provided that the product was produced from the respective wine. The consortium has to approve the reference, as long as it is not a mere indication of content.

Those who do not comply with the rules in the future have to expect hefty fines (Section Nine): The elaborate catalogue ranges from 200 to 1000 euro for a vintner who reports the harvest quantity a few days too late, and from 30,000 to 100,000 euro for the forgers of DOP banderoles. This sanction was massively tightened at the request of the industry: the ministry had proposed only 3000 to 15 000 euro. Now, there are also penalties (up to 60,000 euro) for control bodies and consortia that do not fulfill their tasks or that favor or disadvantage producers.Viewed as a whole, the Italians are not wrongly patting themselves on the back: If you disregard the possibility to make "wine" out of table grapes, the regulations have not been watered down. On the contrary, in the wine sector, the conviction has obviously prevailed that the appellations can only be protected effectively thanks to clear and strict rules: The fact that individual regulations have been tightened up at the request of the industry representatives is remarkable. 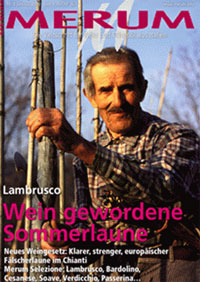 The most important aspect of the law is undoubtedly the strengthening of the consortia, where the logic of the collective appellation has clearly asserted itself against that of the private label. This is in the interest of small winegrowers, but also of those consumers who are equally interested in diversity and typicality. In this respect, the new Italian wine law is indeed an important step in the right direction.

This article is taken from Merum, the magazine for wine and olive oil from Italy, issue 3/2010. You can find out more about Merum at www.merum.info

If you would like to order a subscription to Merum, you can do so here:
Order Merum subscription

ALL PHOTOS IN THIS ARTICLE - COPYRIGHT
MERUM