"The beauty of wine should be grown, not made." Perhaps it was this motto on the winery's website that inspired me to buy the wine at the time (when I visited the winemaker). Or maybe it was my ambivalent relationship with the Domina present in this cunvée (I don't know in what proportion). In any case, the wine stayed (too) long, got older and older, hid behind the other bottles, so that it - which, according to reliable information, was supposed to be drunk until 2005 - came into the glass only now, almost ten years too late. And? The wine was still present, a fine, polished - not exciting - Pinot Noir. Whether the Domina (which I judged sceptically to dismissively) helped or hurt it, I can't judge. Familiar with Pinot Noirs (the most important grape variety in German-speaking Switzerland), I am now "neutral" about the wine. 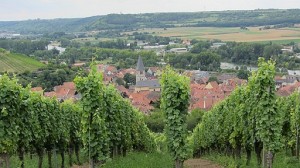 In any case - according to my notes at the time - it was quite acceptable (to good) among the Pinot Noirs tasted at the time, but ranked well behind the Pinot Noirs from the Bündner Herrschaft (Switzerland) that I know (and also drink very often!) And today? The power has somewhat disappeared from the wine, the fruit (berry notes) has retreated, the wood and toasted notes have also been "swallowed", what has emerged is a fine, restrained, slightly sensual drop. Whether it would have been worth drinking in earlier (not almost ten years too late), I don't know. I only know that the wine yesterday was (for me) a good, thoroughly positive experience.