Greece will be a major focus at the Munich Wine Fair. As part of the event, which will take place from 19 to 20 March 2011 in the Zenith Kulturhalle, Wein-Plus is organising the special tasting "Wine Guide Greece". More than 15 vintners and traders will present their wines there.

Apart from the mostly meaningless mass wines that are so popular in Germany, Greece offers many high-quality drops of local grape varieties that are hardly known in this country. In recent years, there has been a considerable quality boost in Greek wine. The wine classification with controlled designations of origin corresponds to the French model. Detailed information on Greek viticulture is compiled in the wine guide from Wein-Plus.

Wine tastings and seminars on site

The wine fair is aimed at trade visitors from the gastronomy and retail sectors as well as private wine lovers from the greater Munich area. The focus is on over 2,500 national and international quality wines, sparkling and semi-sparkling wines as well as fine spirits, delicacies and coffee specialities. Visitors can taste, compare and buy the products directly on site. 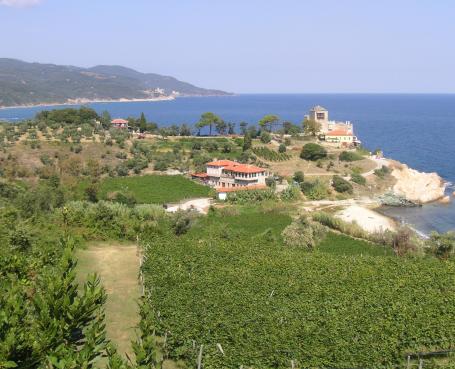 They can expand their wine knowledge in wine tours and themed seminars.

There will also be a seminar on wines from Greece, conducted by Utz Graafmann and Stelios Paltatzidis from Wein-Plus. Graafmann will go into the general situation of Greek wines, the history and current marketing campaigns. Paltatzidis, himself Greek, explains the regions, grape varieties and categories of wines. The seminar participants will also taste some specialities, including a Vinsanto from 1995 and a Samos Nectar from 1975.

In the "Wine Guide Greece" area, visitors to the fair can get to know wines from the following suppliers:

Ktima Founti, Naoussa, Macedonia
After his family had already started winegrowing in 1930, Nikos Fountis founded the current winery in 1992. Four years later, his nephew Dimitris Ziannis joined him after completing his oenology studies in France. From the beginning, Founti specialised in the red grape variety Xinomavro. The domaine produces three red wines, three white wines and one rosé. 90 percent of these are made from Xinomavro, and Merlot and Malvasia Aromatica are also grown.

Argatia Winery, Rodochori Naoussa, Macedonia
Viticulture specialists Panagiotis Georgiadis and Dr Haroula Spinthiropoulou founded Argatia in 2000, a name that dates back to the 4th century Greek kingdom of Pontos, where it referred to the collective spirit in which many people work together to achieve a common goal. The winery practices organic farming and cultivates the grape varieties Xinomavro, Negoska, Assyrtiko, Athiri and Malagousia.

Mylopotamos, Mount Athos, Macedonia
Mylopotamos is the largest estate of the Holy Monastery of Megisti Lavra on Mount Athos. The first vineyards were already planted when the monastery was founded in the 10th century. In 1990, the reconstruction of the estate began and new vines were planted in 1992. Today, Merlot, Limnio, Xinomavro, Cabernet Sauvignon, Agiorgitiko, Moschato Alexandrias and Roditis are grown on an area of five hectares. Athonite winemaking, which is a special form of organic cultivation, is faithfully maintained in the modern winery. Father Epifanios, who built up the winery and has since also taken care of exports, is considered the soul of the business and represents Mylopotamos at the Munich Wine Fair.

Ktima TatsisGoumenissa, Macedonia
The Tatsis family acquired their first vineyards in the 1920s and today cultivates 13 hectares of vines. Christos Tatsis, who runs the winery together with his sons Perikles and Stergios, has been working according to the guidelines for organic cultivation since 1998. The majority of the grapes are Negoska and Xinomavro. Other red varieties grown are Cabernet Sauvignon, Merlot and Cinsault; white wines are made from Roditis Alepou, Malagousia and Chardonnay.

Elinos S.A., Fitia Imathia, Macedonia
Nikolaos Taralas established his family's winemaking tradition as early as the beginning of the 20th century. His grandson Dimitrios initially pursued viticulture as a hobby and created the Elinos winery in 2006 after retiring as a banker. Elinos practices organic viticulture and cultivates the grape varieties Xinomavro, Merlot as well as Malagousia, Preknadi, Cabernet, Moschomavro, Negoska and Roditis. The winery is certified according to the ISO 22000 quality management system.

Domaine Claudia Papayianni, Arnea Chalkidiki, Macedonia
After the first vineyards were planted in 2003 on an area of 20 hectares, the 3,300 square metre modern winery was built in 2006. In 2007, Claudia Papayianni's first two wines came onto the market. The winemaker, whose mother comes from Germany, works organically and cultivates the local grape varieties Malagousia, Assyrtiko and Xinomavro as well as the international varieties Chardonnay, Viognier, Merlot, Syrah, Cabernet Sauvignon and Grenache, which are partly single-varietal and partly cuvée. Around a third of Claudia Papayianni's wines are exported, mainly to the USA, Germany, the Benelux countries and Cyprus.

Dio Fili Estate, Siatista, Macedonia
The name of the winery means "the two friends". It was founded in 2006 as a cooperation between Yiannis Boutaris (Kir Yianni winery) and the married couple Yiannis Polizos and Georgia Goutziamani. The house speciality is sweet wines made from grapes dried in the shade. The grape varieties include Xinomavro, Moschomavro, Cabernet Sauvignon, Merlot, Syrah, Pinot Noir, Gewürztraminer, Moscato Bianco and Assyrtiko. Gewürztraminer is grown in Siatista at an altitude of 950 metres. Since Yiannis Boutaris was elected mayor of Thessaloniki in autumn 2010, Yiannis Polizos and his wife have been taking care of the winery alone.

Sgouridi Wines, Xanthi, Thrace
The winery in the small fishing community of Advira was built by Panagiotis and Anastasia Sgouridi from 2000 to 2005. Panagiotis Sgouridi has been a member of the Greek parliament for many years and was even its vice president. Today, the parents are supported in the winery by their sons Napoleon and Sgouris. The vineyards cover ten hectares of vines near the Thracian Sea. They are planted with the white wine varieties Assyrtiko, Malagouzia, Roditis and Trebbiano Toscano (Ugni Blanc) and the red wine varieties Cabernet Sauvignon, Merlot, Mavroudi and Pamidi. Vinification and bottling take place at Foundis Estate in Naoussa, Macedonia.

S. Kechris WineryThessaloniki, Macedonia
Stelios Kechris, an oenologist who studied in Thessaloniki and Dijon, runs the family winery, whose roots go back to 1911. The winery was founded in 1954. The grape varieties cultivated are Xinomavro, Cabernet Sauvignon, Merlot, Sauvignon Blanc, Roditis and Moschatos. Kechris' main concern is retsina, of which he produces two different versions: Kechribari (based on Roditis and Savvatiano) and "The Tear of the Pine" (based on Assyrtiko). In addition, Kechris offers the Doriki liqueur line.

Evangelos Tsantalis S.A., Agios Pavlos Chalkidikis, Macedonia
Tsantalis is the largest wine producer and wine merchant in Greece. The family tradition began in 1890 with the production of pomace brandy (tsipouro). Evangelos Tsantalis laid the foundation for today's company when he bottled and marketed red wine in Naoussa after the Second World War. In the meantime, the company is run by the third generation, Ioanna and Dr. Georgios Tsantalis, and operates four of its own wineries in Agios Pavlos (Chalkidiki), Rapsani (Olympus), Naoussa (Western Macedonia) and Maronia (Thrace). Tsantalis has around 90 hectares of its own vineyards and cultivates a further 80 hectares of the Domaine Metochi Chromitsa on Mount Athos, which are leased from the monastery of St. Panteleimon and are cultivated organically. In addition, the company processes grapes from 680 contract winegrowers with another 500 hectares of vineyards. The range of grape varieties includes the indigenous varieties Agiorgitiko, Assyrtiko, Athiri, Batiki, Mavroudi, Moscato, Mavrodaphne, Roditis, Xynomavro and Zoumiatis as well as the international varieties Cabernet Sauvignon, Chardonnay, Merlot, Muscat d'Alexandrie, Sauvignon Blanc and Syrah. In addition to wine, Tsantalis also produces high-quality grape marc and grape brandies in several distilleries.

Oinos Kotti, Varda Ilias, Peloponnese
In 2001, the brothers Spyridon and Georgios Kottis laid the foundation for the family winery with six hectares of vines. In 2002, another six hectares followed, and the modern winery was built five years later. With Mavrodaphne, Roditis, Agiorgitiko and Moschofilero, Oinos Kotti cultivates exclusively Greek grape varieties. The health-promoting aspects of moderate wine consumption are of great importance to the Kottis brothers.

Gavalas Wines, Santorini, Aegean Islands
The winemaking tradition of the Gavalas family dates back to the end of the 19th century. In 1973, the Gavalas opened a wine shop in Athens, specialising in wines from their home island of Santorini. In 1998, the first own Vinsanto was bottled in the winery in Megalochori, after the winery had been the exclusive Vinsanto supplier of the Greek wine giant Boutari for six years. Gavalas grows the autochthonous grape varieties Assyrtiko, Athiri, Aidani, Mavrotragano, Voudomato, Katsano and Gaidouria. Vinsanto and Nykteri are still among the specialities, along with dry white and red wines.

Hatzidakis WinerySantorini, Aegean Islands
Oenologist Haridimos Hatzidakis and his wife Konstantina founded Hatzidakis Winery in 1996 after meeting at Boutari, one of Greece's largest wine producers. The winery was originally owned by Konstantina's parents, but they had abandoned it in the mid-1950s. The volcanic vineyards first had to be reclaimed and replanted. They are now planted with the white wine varieties Aidani Aspro, Assyrtiko and Athiri, as well as the red wine varieties Mavratragano, Mandilaria and Voudomato. Hatzdakis works according to ecological guidelines and offers Vinsanto and Nykteri, among others. A speciality is the sweet wine Voudomato from the red grape variety of the same name, which is grown exclusively on Santorini.

Limnos Organic WinesLimnos, Aegean Islands
Limnos Organic Wines is the company of Giannis Savvoglou and Pantelis Tsivolas. The oenologist and the wine marketing specialist founded the winery in 2002 with the aim of producing top quality wines from organic cultivation. The farm cultivates 20 hectares of vines, with a focus on Muscat d'Alexandrie. Limnio, Cabernet Sauvignon and Fokiano are also grown. Limnos Organic Wines is regularly inspected by the certification organisation DIO (Organic Products Inspection and Certification Organization).

enexia - wine and more
Susanne and Stefan Schaarschmidt's internet shop Enexia initially specialised in products from the Greek island of Samos, mainly wine and olive oil, but also herbs, mountain tea and honey. Since 2008, only wines from autochthonous Greek grape varieties have been consistently included in the range. The range of Samos wines from the Moscat Aspro, Ritinos and Fokianos grape varieties includes liqueur and sweet wines as well as dry growths. Since 2010, wines from the island of Euboea have been another focus.

Atlas Wholesale Ltd
The wholesale company Atlas, based in Munich, was founded in 2008 by Dimitrios Preventis as an offshoot of the Nuremberg-based Preventis Import GmbH. The company offers the finest Greek food and quality wines and sources wines directly from Tsantalis, Boutari, Nico Lazaridi, Gerovasiliou, Biblia Chora, Wine Art Estate, Ktima Lykos, Alpha Estate and Ktima Tselepos. Atlas now has 15 employees and supplies the best restaurants in Munich. The opening of a delicatessen is in the planning stage.

The Munich Wine Fair at a glance

The regular daily admission fee is 10 euros and free for Wein-Plus members. The printout of the current newsletter serves as proof. Please print it out in full and present it at the box office.

To the Munich Wine Fair