The makers of the Gambero Rosso Vini d'Italia, which has long become a standard work, had a small anniversary to celebrate during the presentation of the book in Munich. For 15 years now, a jury consisting of journalists, producers, wine traders and other people connected to the topic has been deciding about the weal and woe of the country's oenological products.

It started in 1987 with a print run of just 5,000 books, today there are 80,000 in Italy alone and the German and English editions make up another 60,000 copies. 1.500 wines and 450 producers were presented in the first edition; 33 growths received the highest award for the first time. 1500 wines seem rather few in view of the 12,610 currently represented, but at a time when the Italian wine world was practically at the bottom after the effects of the methanol scandal, 1500 recommendations were quite a lot. It can be said without hesitation that without the courageous decision to establish a new kind of wine guide in the middle of the biggest crisis, Italian wine would hardly have the high status it undoubtedly deserves today.

With the new edition, besides the larger scope, some other changes have taken place. First of all, due to the better manageability of the 792-page work, the usual hardcover has been sensibly dispensed with in favor of a somewhat thicker but flexible paperback cover. But also content and organization hold news. From now on, for example, the three-glass wines, but also those with two glasses, which reached the final selection, are marked in red. Thus, a new "two and a half glasses" category was practically created for those drops that only just missed the highest score. The "other producers" section has been significantly expanded and now includes wine ratings in addition to a brief description of the producer. Moreover, in order to improve the transparency of the ratings, a new control system was introduced, which should make it impossible even for the editors to change individual ratings afterwards.
After a two-year guest performance in Berlin, the presentation of the book and the most awarded wines took place this time in the action forum of Munich's Praterinsel. In the rooms, which are spread over two floors, there was enough space for the almost 200 producers, who brought a total of 214 wines.

Unfortunately, the biggest problem was not solved this year either: the lack of time. It is completely impossible to get a comprehensive picture of the products presented in only 4 hours, the more so as only two hours are reserved for the professional audience and it gets really crowded from 5 p.m. on, which hardly allows for a halfway serious tasting anymore. 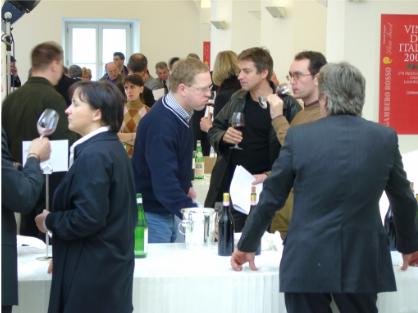 So this year, too, there were only a few topics that I was able to cover more or less completely. After the unknown regions were described last year, this time - also in view of the first-class vintages in these regions - mainly the classic appeals of Piemont and Tuscany were discussed. Several points were striking here. First of all, there seemed to be considerably more wines this year that really deserved their 3 glasses - from my point of view. At least in the two qualitatively most important wine growing regions of Italy, there were hardly any outliers to be found. The only regrettable thing about it is that despite all the perfect workmanship, the styles continue to become more and more similar. Only a few wines really shone with their very own, unmistakable character. Unfortunately, the barrique mania seems to be progressing more and more in Piemont, too. Thus, not only the Nebbiolo is often robbed of some of its personality. Also and especially with Barbera, which all too often comes across as loud and obtrusive, real drinking pleasure rarely wants to arise despite all fruit and substance. Nevertheless, this time there was a whole series of wines that I would put in my cellar without hesitation.

And this alone is more than enough reason to come back next year.