There are also little games when enjoying wine, which you don't really want to do, which you forbid yourself, but which you do again and again, almost compulsively, I would say. One of them is the comparison of the two wine estates from the Bordelais: Pichon Longueville Baron and Pichon Longueville Comtesse de Lalande. The name gives it away, almost two hundred years ago they still belonged together, then they were torn apart - as so often - by division of inheritance. Who can blame whom when still today the two wine estates - both so-called "Supersecond" - are compared with each other. Personally, I prefer the "Comtesse", whereas in the past few years, the "Baron" was rated as better.

Meanwhile, the competition between the two wine estates (only the road separates the area) has long become a direct wrestling among investors. Pichon Baron, as it is also called for short, has belonged to the AXA insurance group for 24 years. The Comtesse Lalande, on the other hand, was run as a family estate until eight years ago and for a long time was managed by a woman - as befits its name - "with an iron hand", which earned it the name "The General". Now, the Comtesse has also been sold to a multiplayer (to the Roederer champagne house. The shares are said to have already moved on again!) 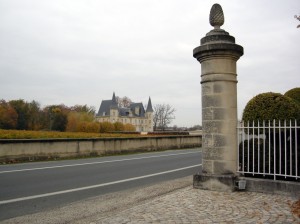