The 70s are - generally speaking - rather "small" years in Bordeaux. The famous (and also pampered) wine region was in crisis and recovered only in the 80s (not least due to the onset of criticism by Robert Parker) and then finally in the late 90s. Of course, there are exceptions, both in terms of vintage and wineries. However, the 1976 vintage was quite respectable, even if it never quite lived up to its reputation (large yields, early harvest). Of course, I was surprised: what happened to a Palmer 1976 (after 38 years)?

Not something great, but a thoroughly good old wine. An example also that one can decant also old wines absolutely or - in this case - should probably also decant. The wine opened up considerably during the evening, gaining nuances of spices, tobacco 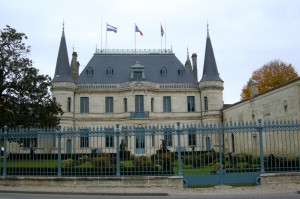 Spices, tobacco, forest earth, pepper. At the same time - this should not be concealed - the typical plum or/and damson aromas of a matured old wine dominated, which is getting ready to slowly fade away. I can imagine that the wine had more power and juice for five, ten years, and that the advice "drink up" is quite justified.

Lots of freshness after 40 years of bottle ageing